Can we not just Co- Exist?

These are my thoughts following a performance that my Choir did as part of “Faiths In Tune”, a Festival using song and music as a means of uniting people from different faiths. It was a truly magical day and there were some beautiful performances.

Hearing the singer, Faisal Salah, representing his faith and singing songs that he had wrote inspired by his faith, resonated a lot with how I feel about mine. It is a reminder to all of us that we all have our own path to the divine or not if we don’t choose to connect.

Atrocities have been committed in the name of religion. Colonialism has used religion has a means to control and oppress. However, that does not mean that every person practising any chosen faith has to be tarnished with the same brush. The matter of faith and religion is complex and multilayered  and there are many truths involved.

At the same time, it is incredibly upsetting that in 2018, Orisha practitioners are still being vilified. Recently several Olorishas were arrested in San Antonio, Texas.  They are due to appear in court on the 9th April 2018.   What was worse was how they were represented in the media and how their neighbours had described them.  The house was called “ The House of the Devil“, and mug shots were shown in the media in a way  which was obviously meant to represent them as criminals. Why do I care being in the UK? I care because we live in a difficult environment where people are so quick to judge and blame. Post Brexit, it seems that there have been a rise in hate crimes and xenophobia is common place.  This could happen anywhere and anytime  to anyone, and it is important to defend and stand up for those that practise our faith wherever they are in the world.

It is perhaps well known that Animal Sacrifice is part of our belief and way of life, although it is not necessarily the main focus. However how is it different to Jewish Kosher and Moslem Halal Slaughter? Ritual Slaughter just means that the animals are prayed over.  The animals are slaughtered in the most skilful and humane way possible. In general, in the Orisha tradition, whether it be Lucumi, Isese, or Candomble the meat is eaten and shared out in the community. In many communities where food is scarce, ceremonial meat can truly be a blessing.

There is a certain hypocrisy from people who are quite happy to eat meat. People who will buy plastic wrapped chickens from a supermarket. Animals who when alive, survived in squalid conditions and are bred for slaughter. These people will not question their animal consumption yet will criticise and judge without understanding. Most people do not know where their meat comes from and have never seen an animal being slaughtered so that they can eat. There is a certain disconnection.

Vegans also who claim that eating meat is cruel, don’t take into account that every plant is a living, yes indeed breathing thing and that their way of life may compromise environments and cultures. Many substitutes are not seasonally grown in their environment and they it is not ethical to consume some products now on the market for the new age Vegan.

Faiths in Tune is into it’s  7th year and continues to grow. I really hope that the festival gains funding so that they are able to pay their musicians and grow, spreading the message which is that we can successfully co-exist and understand each other as human beings. Please explore the links below to learn more about Faiths In Tune and to find out more about the Campaign to help those affected in San Antonio Texas. 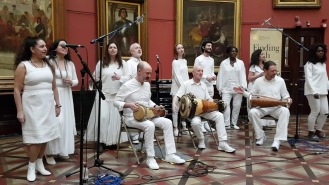 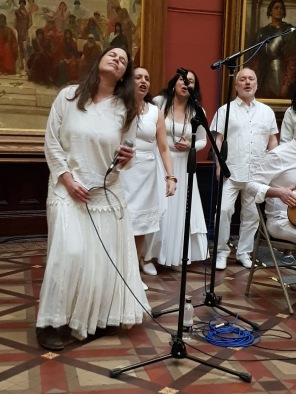 About Faiths in Tune and how you can get involved

A fund set up to help those affected by the arrests in San Antonio.